The psychedelics boom has seen the number of classical and non-classical psychedelics being trialed for mental health conditions skyrocket. Virtually all these trials are yet to complete, but psychedelic clinics are already open. In these clinics, licensed psychedelic compounds like ketamine, which has avoided regulation as a sedative compound, are administered to patients. Field Trip Health, a Toronto-based provider, is developing its own compounds, like the tryptamine-based FT-104, while also offering therapy-paired psychedelic experiences with ketamine at its clinics. We spoke to co-founder and executive chairman, Ronan Levy, to find out more about Field Trip’s approach to psychedelic therapy and why 2021 has been such a significant year in psychedelics.

What have the biggest developments for field trip been in 2021?

RL: 2021 has been a big year for us. I think the biggest development was listing to the Toronto Stock Exchange, and then cross listing on to the NASDAQ, as well as the financing we completed in March, where we raised $95 million. I think that was pivotal for a number of reasons, the biggest one, I think, because we had heard from a number of friends and advisers that we’d never be able to raise money from traditional pharma and biotech investors, given our integrated model. We managed to prove them wrong with the biggest funding financing in Canadian psychedelic history, and one of the largest overall, which is great validation for our drug development strategy.

Beyond that, three things. The continued execution of our clinic rollout; we’re at nine locations right now. The results we’re seeing in our clinics are just fantastic. On average, most patients who come through our treatment programs see sustained benefits in terms of their depression and anxiety scores for 120 days or more post-treatment, which, as far as I know, makes it the single most effective treatment option out there.

Right now, I’ve never heard of any other treatment programs offering that kind of stat, especially when you compare it to say, IV ketamine infusion clinics, where the benefits tend to revert to the mean after about three weeks, I believe. So, our clinics have been tremendously successful in helping people and building awareness for Field Trip.

Our drug development efforts, I think, have been remarkable. We’ve made great progress. We’ve provided a lot of guidance about FT-104. It’s a tryptamine that is very similar to psilocybin, but with about half the duration of experience, addressing one of the key limitations around psilocybin, which is the time and the cost involved in the duration of experience. So that’s very exciting. We launched our new pipeline program and the FT-200 series. We’re continuing to evaluate other potential candidates to be a lead in the FT-200 series, though the first one that we’ve developed shows an incredible amount of promise in terms of maintaining the potency of classic psychedelics but addressing the [side effects] associated with potentially agonizing the 5-HT2B serotonin receptor. That’s really exciting as well.

RM: Why do you believe Field Trip’s approach has outperformed ketamine IV clinics?

RL: Ketamine IV clinics kind of treat ketamine like an antidepressant. They provide an IV on a slow drip, and they maintain a very mild level of ketamine for the duration of the experience. We know that ketamine can cause synaptogenesis; it causes the brain to grow new neural synapses, which is very positive. But the IV infusion approach, I think, misses out on some of the core elements of what makes psychedelic-assisted therapies so powerful.

What you miss is twofold. One; we give intramuscular injections as opposed to IV, so it’s very quick onset with very high bioavailability. And it induces a very psychedelic-like experience, not too dissimilar from classic psychedelics, during which people are often able to go back and revisit past traumas, past experiences, past memories and see them from a different light. This is what people, I think, try to get to through conventional talk therapy or cognitive behavioral therapy. We just help people get there, in a very quick instance, with ketamine, and that’s because we’re giving intramuscular injections which have fast onset, whereas with ketamine IV, it’s slow onset, so you don’t have that similar psychedelic experience with ketamine IV. 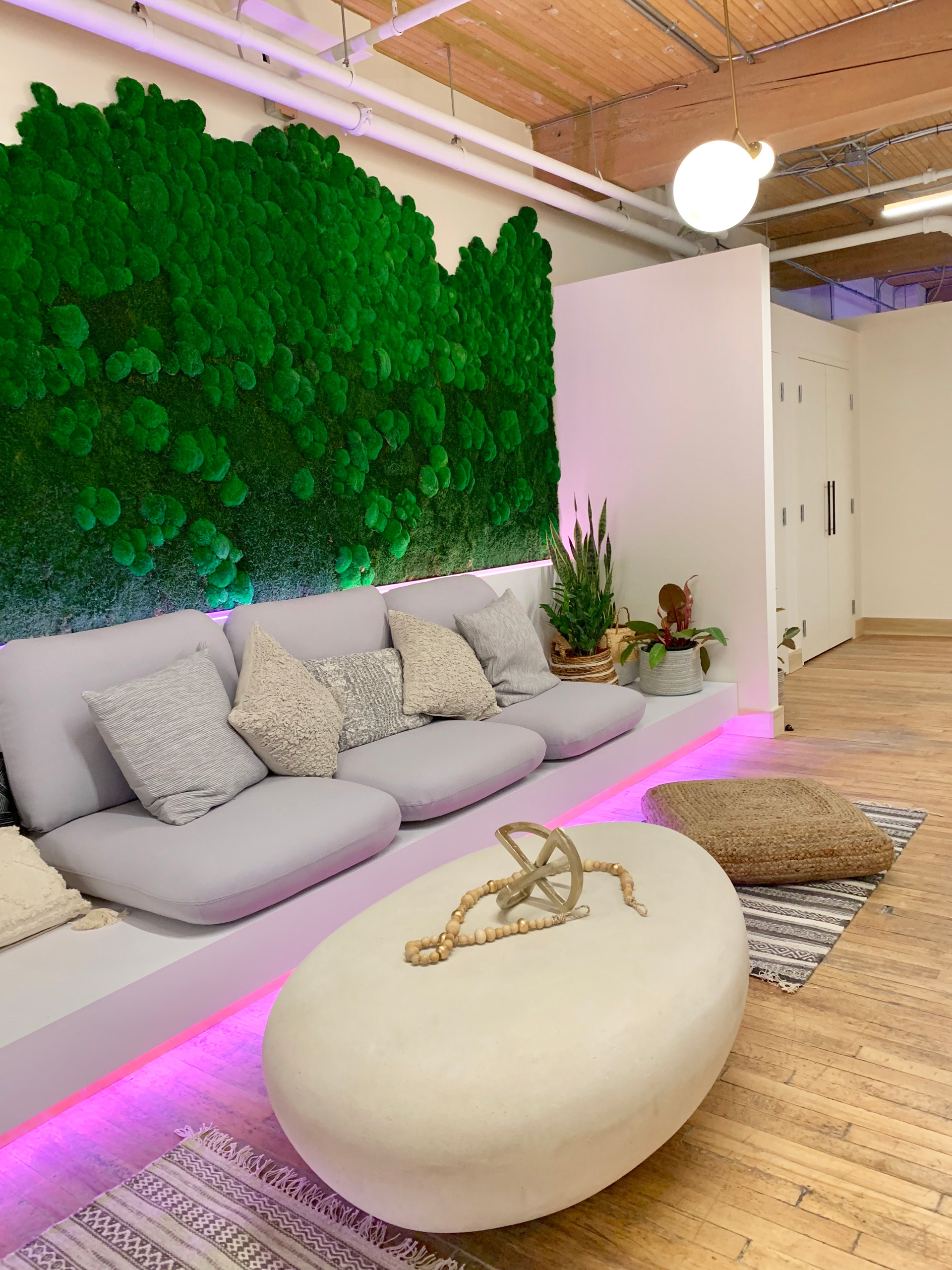 The second thing is because we pair our programs so closely with psychotherapy, we get to take advantage more effectively of periods of neuroplasticity [induced by the drug], where people are able to make changes to habit, mindset, outlook and practices in their lives. Not only do they get the lift from the ketamine and the benefit of that emotional processing, they actually get to, it seems, adopt new lifestyle considerations that support these improvements of mental health.

We know that how you eat and exercise impacts on mental health. And during these windows, it seems people are more able to adopt those different decisions that support a better emotional and mental health outlook from their perspective. So that’s why I think we’re seeing much better results. It’s really a function of the therapy and the protocol that we use.

RM: Do you think that, post-approval of psychedelic-assisted therapy approaches, there could be a push towards purely pharmacological interventions from pharma lobbies that are less effective? What do you think is the future of psychedelic drug development?

RL: I think if people benefit, it’s wonderful. Just because they’re not benefiting as much as they potentially could doesn’t mean we should be critical; it just means we need to recognize that there’s different approaches here and different desires.

I know there’s a lot of interest in some groups in finding psychedelics that can be treated like antidepressants, you know, a pill that you take once a day, and it has significant improvements. I think that’s wonderful. There’s some people who want to do the work. And then some people don’t want to do the work. Some people want to climb mountains, other people are content to sit at home and drink coffee at the kitchen table. I think the more robust options we have available for people, the better. I personally like to lean into the psychedelic experience. I think there’s value in the work and the process. But that’s me. And that’s not everybody. And if somebody else says, “I’m not interested in that, I just want to feel better through a more conventional allopathic medical approach.” Great. They should have options as well. I don’t see that as a conflict. Personally, I think at the end of the day, we’re all working towards the same thing. Then we take different approaches, and as long as people aren’t being harmed by it. I think it’s wonderful.

“Some people want to climb mountains, other people are content to sit at home and drink coffee at the kitchen table.”

RM: You mentioned your programs for drug development, which is focused on compounds derived from classical psychedelics. Do you believe that the efficacy you’ll see when using these classical 5-HT2A receptor agonists will be significantly different from the efficacy you see currently with ketamine?

RL: I think so. We’re seeing wonderful results with ketamine. I’ll be honest, when I first started in the industry, I had this vision that ketamine would eventually be leapfrogged by the other psychedelics because, at least on the face of it, the potential impact of, say, psilocybin looked greater.

However, I’ve changed my perspective. I think ketamine is going to remain a core part of psychedelic-assisted therapies and clinics like ours are going to be able to offer a number of different treatment protocols, some on-label some off-label, but I think ketamine will form a part of it. What’s really nice about ketamine is that people don’t have to give up their conventional treatments, such as [classical antidepressants] SSRIs or SNRIs to access ketamine assisted therapy. At least right now, the guidance is with psilocybin and MDMA that you want to be off antidepressants before you start treatments. Ketamine is actually a very nice onboarding for people looking to explore medicine in this respect.

That said, I do anticipate you’re going to see better results with the classic psychedelics, and that’s not based on just my opinion. I think if you look at the data coming out of a lot of the studies, the potential impact of psilocybin and classic tryptamines tend to be higher than what we’ve seen with ketamine.

But that’s just my anticipation, and the data will speak for itself. I think, though, that you’ll see the psychedelic medical industry start to resemble the underground psychedelic therapy industry right now. Yes, MDMA will be specifically approved for the treatment of post-traumatic stress disorder and psilocybin will be specifically approved for major depressive disorder or treatment-resistant depression (TRD). And FT-104 will be specifically approved for TRD and post-partum depression, which is the indications we’re going after, but I think people will start with ketamine as probably the first onboard. They may use psilocybin to help treat their depression, but their psychiatrist may also say “We’ve used psilocybin to treat your depression and it’s very effective, but from our conversations, it seems that there’s a lot of trauma underlying your depression. So even though you may not have a diagnosis of PTSD, MDMA may be a beneficial adjunct therapy,” I think people will continue to work in that kind of regard. I really do believe we’re going to see a robust blend of options available to people. And I think that’s going to lead to the best outcomes.