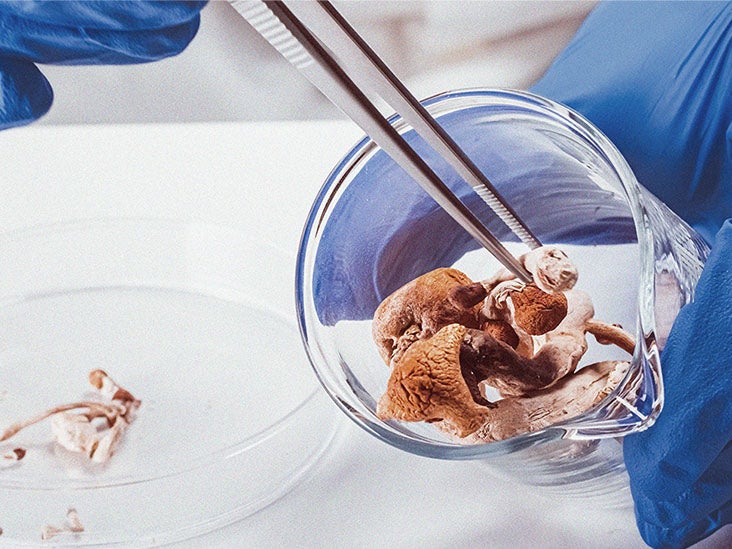 Psychedelic therapy is the use of plants and compounds that can induce hallucinations to treat mental health diagnoses, such as depression and post-traumatic stress disorder (PTSD).

Some of the compounds that doctors most frequently use in this form of treatment include psilocybin mushrooms, LSD, and mescaline (peyote). The formal study of psychedelics to treat mental health conditions is relatively new, but emerging research suggests that these psychedelics may help some people with some symptoms, especially when other methods of treatment have failed.

Researchers do not know exactly how or why psychedelics work in this manner. They may “reset” the brain by altering neurotransmitter levels, induce a new perspective on life by causing a person to have a mystical experience, or teach a person a new way of thinking. Some research also suggests these psychedelics increase suggestibility, making a person more open to ideas discussed in therapy.

Keep reading to learn more about psychedelic therapy, including more about the conditions it may benefit, the types of treatment, and how it may work.

Psychedelic therapy uses psychedelic plant compounds that can induce hallucinations, such as LSD and psilocybin from “magic” mushrooms, to treat mental health issues.

Sometimes doctors prescribe this treatment on its own. Often, though, they combine it with other treatments, such as therapy or other forms of support. The goal of psychedelic therapy is to increase the success of traditional treatments.

In many cases, doctors try this form of therapy on people whose symptoms have not responded well to standard medications or therapies.

Traditional medications for mental health conditions often take several weeks to work, or may only work for as long as a person takes them. Most research on psychedelic therapy, by contrast, has found an immediate improvement, often with a single dose.

Researchers do not know exactly how psychedelics work, and these drugs do not work for everyone. Some potential ways they might work include:

Some other drug options include:

Below are some potential health benefits of psychedelic therapy:

Facing a serious or deadly diagnosis can be scary, especially if a person feels anxiety about death itself or what might happen afterward. A handful of studies suggest that psychedelic therapy may ease this existential dread, as well as the anxiety and depression that accompany it.

A 2016 study of 29 people with cancer who had anxiety or depression related to their diagnosis compared those who got a single dose of psilocybin mushrooms to those who got a placebo. The psilocybin reduced cancer-related anxiety, hopelessness, and dread immediately after the dose. At 6.5 months, 60 to 80% of the psilocybin group continued to report improvements in depression and anxiety.

These improvements persisted for 80% of participants when researchers followed up 6 months later.

Psychedelic therapy may also ease symptoms of depression and anxiety in people not facing serious illnesses.

A 2020 review reported on 24 prior studies on psychedelic drugs to treat anxiety symptoms. It said 65% of studies reported a reduction in anxiety with psychedelics, though the studies were small and some had methodological flaws.

However, because the study relied on self-reporting, it does not conclusively prove that psychedelic experiences can affect mental health. Rather, it suggests a mechanism through which psychedelics might improve mental health, which is in feeling greater self-compassion and less obsession with negative thoughts.

A 2017 study looked at people with treatment-resistant depression. Researchers gave 20 people with mostly severe depression two doses of psilocybin 7 days apart, then followed up with them for 6 months.

Researchers observed a significant reduction in symptoms for the first 5 weeks following treatment. At 5 weeks, nine participants had responded to treatment, and four had depression that was in remission. Participants were more likely to have improvements in their depression symptoms if they had quality psychedelic experiences during the drug dose.

The psychedelic effects of hallucinogenic drugs may help ease the effects of trauma, but research so far has produced mixed results.

Another 2020 study followed gay male survivors of the AIDS pandemic who reported feeling demoralized. Participants attended eight to 10 group therapy sessions, and got one dose of psilocybin. At 3 months, researchers found clinically significant reductions in participants’ symptoms of demoralization.

A 2015 proof-of-concept study recruited 10 volunteers with alcohol addiction to undergo psilocybin therapy along with a type of psychotherapy called motivational enhancement therapy. In the first four weeks, during which participants only received psychotherapy, alcohol use did not decrease. After taking psilocybin, though, participants drank significantly less.

Participants who had intense psychedelic experiences were more likely to quit drinking.

A year later, 67% had successfully quit smoking, and at 16 months, 16% remained non-smokers. These are significantly higher success rates than doctors typically see either with other medication or with therapy alone.

Ibogaine is another plant compound that early research suggests may prove beneficial in treating extreme addiction. Learn more about it here.

The mystical and psychedelic experiences a person has with psychedelic therapy may shift their body image away from unhealthy thoughts, potentially easing symptoms of eating disorders.

A 2020 systematic review reports on people who underwent psychedelic therapy for eating disorders, several of whom said their experiences while under the influence of drugs offered them new insights that encouraged them to embrace healthier habits.

People with eating disorders often have other mental health symptoms, so psychedelic therapy might ease the symptoms that lead to disordered eating. A 2020 study of 28 people with a history of eating disorders found that psychedelics significantly reduced participants’ reported depression symptoms.