Get a compelling long read and must-have lifestyle tips in your inbox every Sunday morning — great with coffee! 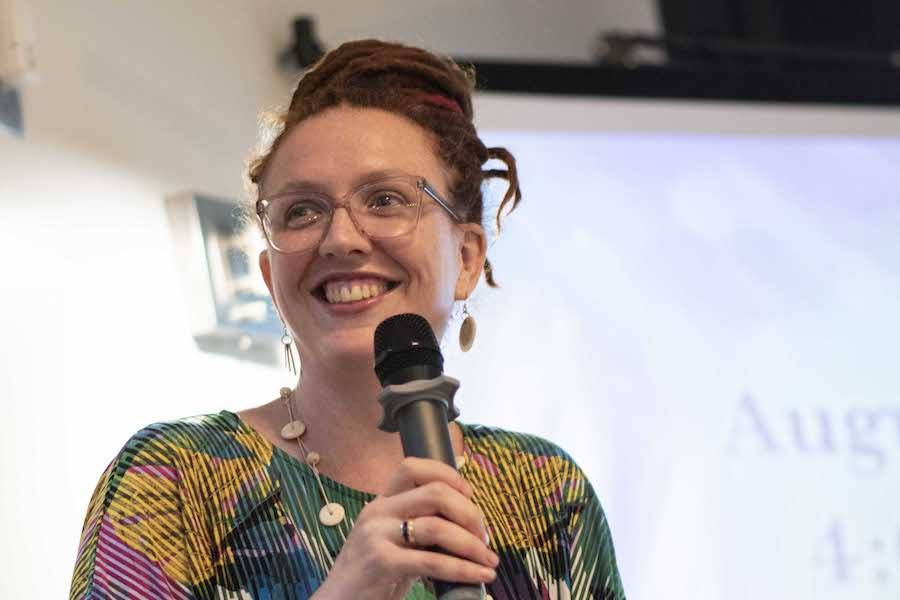 Medical marijuana is so 2019. At the just-opened SoundMind Center in West Philadelphia, physician and psychotherapist Hannah McLane is treating patients with ketamine and plans to incorporate MDMA and psilocybin, a.k.a. magic mushrooms, once she can legally do so. We called the Temple (speech pathology), Brown (med school), Harvard (masters of public health) and Penn (neurology and preventive medicine) alum to learn more about this fascinating area of medicine.

What mental illnesses can be treated with psychedelics?
This answer is a bit more complicated than listing out a bunch of indications. I see the world primarily through the lens of trauma. And I understand trauma in a broader sense compared to the way psychiatry defines it. We all have trauma. For some people, it is “big T trauma” like a military trauma or childhood sexual trauma. But for others, it is a form that is more chronic and everyday, like, say, racism or other microaggressions. Some of us have memories from childhood we can’t shake or a nasty divorce that still haunts us. These are all real and affect the way we are in our everyday life.

Where do psychedelics come into play?
Sometimes, someone is referred to ketamine-assisted therapy because they qualify for a PTSD diagnosis, sometimes because of anxiety or depression, but regardless of the diagnosis that qualifies a person for treatment, I still see the way psychedelics work as primarily addressing traumatic experiences and memories. This holds true for ketamine, MDMA, and psilocybin. Because they are used as catalysts to enhance our abilities to process difficult experiences in therapy, at their root they are helping to address those initial traumas that led to psychological problems downstream.

I’m guessing, though, that you’re not recommending that a person who is depressed suddenly starts eating magic mushrooms every day.
We are talking about psychedelics in the context of co-occurring therapy here. Not just psychedelics on their own. There are some psychedelic substances that may have therapeutic properties without co-occurring therapy. But in the research we base our work on and the way we practice at SoundMind, therapy is required during the psychedelic journey. It is primarily an enhancement of the therapeutic process. It’s not just about treating a brain chemical. In this way, we are again redefining how we think of brain health and disease. It’s about the whole picture: your environment as well as physiologic properties of your physical brain, and everything in between. It’s redefining the root of the problem. And we need these therapies and this perspective now more than ever. There is so much healing we need to do.

When did you decide that opening Philly’s first psychedelic-assisted therapy clinic was what you wanted to do with your life?
At a conference in 2018. I saw a video of MDMA-assisted psychotherapy for PTSD. I saw people being healed. Quickly. I had never seen anything like that before. I’ve seen it happen slowly in psychotherapy. But with the MDMA-assisted psychotherapy for PTSD, two thirds of the people were healed after just three months. Two thirds of the people no longer met the criteria for PTSD, and some of these people had 18 years of symptoms. The numbers were astounding. And I decided I wanted to open a clinic.

Tell me more about SoundMind, the organization.
We are a nonprofit aimed at addressing mental health and neurological disorders through integrative medicine and psychedelics. We have a team of 10 clinicians in training to be able to administer MDMA for PTSD once approved. And we’re currently providing ketamine-assisted psychotherapy for depression, anxiety and PTSD. SoundMind is a diverse group of clinicians, interested in creating top-notch psychedelic care to the Philadelphia population and beyond, as well as a particular focus on inclusion of marginalized populations in clinical care and training to become psychedelic therapists — especially BIPOC, LGBTQIA+ and neurodiverse individuals. We are a training, treating and research center that is really the first of its kind on the eastern seaboard. 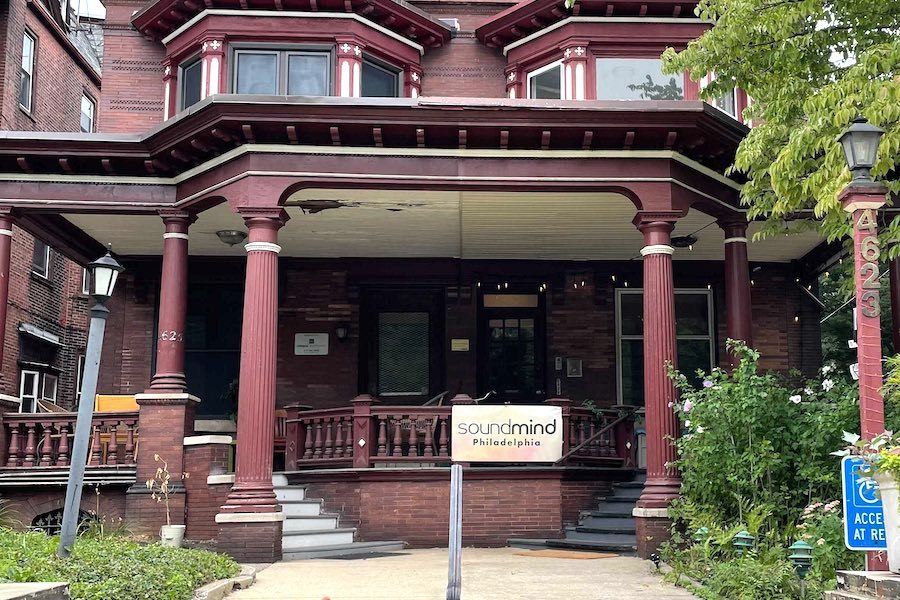 You are only doing ketamine-assisted therapy at SoundMind, because you can’t legally use MDMA yet, right?
Yes. MDMA only became illegal in the 1980s. It was actually used as a therapeutic medicine after it was discovered in 1912. Then in the ’80s, the government freaked out because people started using it as a recreational drug. So they made it a scheduled substance, and there’s been a push to get it approved by the FDA ever since. MDMA is now in phase three clinical trials, and we’re expecting to be able to incorporate that into our practice soon with psilocybin to follow.

All I know of ketamine is what I learned from Law & Order: SVU. It’s a horse tranquilizer that, like GHB, is sometimes used to drug people. How does it work in therapy?
With ketamine, you dissociate. It’s the opposite of MDMA, which makes you extremely grounded. There was a Harvard study that looked at transcripts of MDMA-assisted therapy trials, and it was predicative of success if the patient asked the therapist, “How are you doing?” So it’s weird, because ketamine is a dissociative, so how would it enhance therapy? Well, if you wanna understand Earth, you can shoot yourself into space and look back at it and see this orb with its oceans and continents or you can dig a hole in the Earth and put yourself in it. In both cases, you are learning about the Earth through different experiences. Ketamine is the one where you are shooting yourself into space. People report that they can gain perspective of their life. It can be uncomfortable. You must have a good guide. You need a therapist to sit with you.

Psilocybin is now legal in Oregon for supervised use, right?
They basically voted to legalize it. It’s been decriminalized in some other places, which essentially makes it so people won’t go to jail. But in Oregon, they’ve now allowed an entire infrastructure in psilocybin to be built. Psychiatrists and facilitators are doing a 10- to 12-month training program. And it looks like that training program will then be able to go elsewhere. Pennsylvania is actually very interested in this. There’s a heavy burden of mental health in the state, a heavy burden of PTSD. John Fetterman has shown support for mushrooms. And we have Kennett Square — the “mushroom capital of the world” — right here.

Are you suggesting that the tiny borough of Kennett Square could become the epicenter of psilocybin cultivation and production in the United States?
[Laughs] I’d love that. The infrastructure would be the same. You need the same climate, the same skills, the same sterile environments. But of ketamine and psilocybin and MDMA, I see MDMA as maybe the most important. It really goes deep into trauma and hardships. It’s very predictable and grounding.

What’s the future of all of this?
We’re in phase two trials with psilocybin for treatment-resistant depression. And once it’s approved for that, it can be approved for other indications pretty easily, and then there’s more flexibility around the off-label use. PTSD. Palliative care. Anxiety related to cancer care and dying. MDMA is also being studied for anxiety related to autism, and it’s showing positive results. In Canada, they are studying MDMA for eating disorders. As more research comes out, we’ll understand that this person has this form of PTSD so we’ll start them with MDMA and then maybe psilocybin. Maybe prepare them for that with ketamine. We’re way out from mixing them together, but a lot of researchers are saying you could mix to have different psychedelic experiences. Find the right combo. The research has been shut down for decades, so we’re picking up where we left off in the ’70s.

So you’re using ketamine at SoundMind and plan to use mushrooms and MDMA in the near future. What about LSD?
I think LSD is fascinating, and it probably does have a lot of therapeutic possibilities. It’s being studied for ADHD and dementia. There hasn’t been a lot of research because of the stigma. When you’re going to spend millions of dollars on trials, you’re going to do it for something that doesn’t have much of a stigma barrier to get through.

I’ve heard a lot in recent years about the rise of microdosing LSD and other psychedelics.
Microdosing is interesting. But to me, the innovative part of psychedelics is that you are getting people off of psychiatric meds and ideally not putting them on something else on a daily basis. You can actually heal people with psychedelic-assisted therapy. A deep psychological trip is a lot of work and can be frightening. Microdosing can be a way for certain people — for it to be less scary. But you’re going to run into the same problems again, eventually.

And we’ve somehow gone through this entire interview without talking about the one drug that we smell every day. Where does marijuana fit into all of this, if it does?
I do prescribe medical marijuana, mostly for anxiety and helping someone sleep. But it’s not the same as a psychedelic. There are some clinics out west where you take the cannabis and do therapy. It can loosen up defenses. But I don’t have any experience of using it in therapy. But I’ve heard that people can benefit.

One last thing: Are there implications for psychedelics beyond just mental health?
Psychedelics are not only going to revolutionize mental health. They have the ability to revolutionize all of healthcare. Changing the way we think about the relationship between mind and body. And health and disease. It’s relevant to all of it — not just the things we call “mental health disorders.” People talk about psychedelics creating a mental health revolution, but the way I see it, the effects will reach far beyond mental health. I believe if we do this right — train facilitators properly, always have an eye for safety — these medicines will change the way medicine is practiced.

This interview has been condensed and edited for clarity.