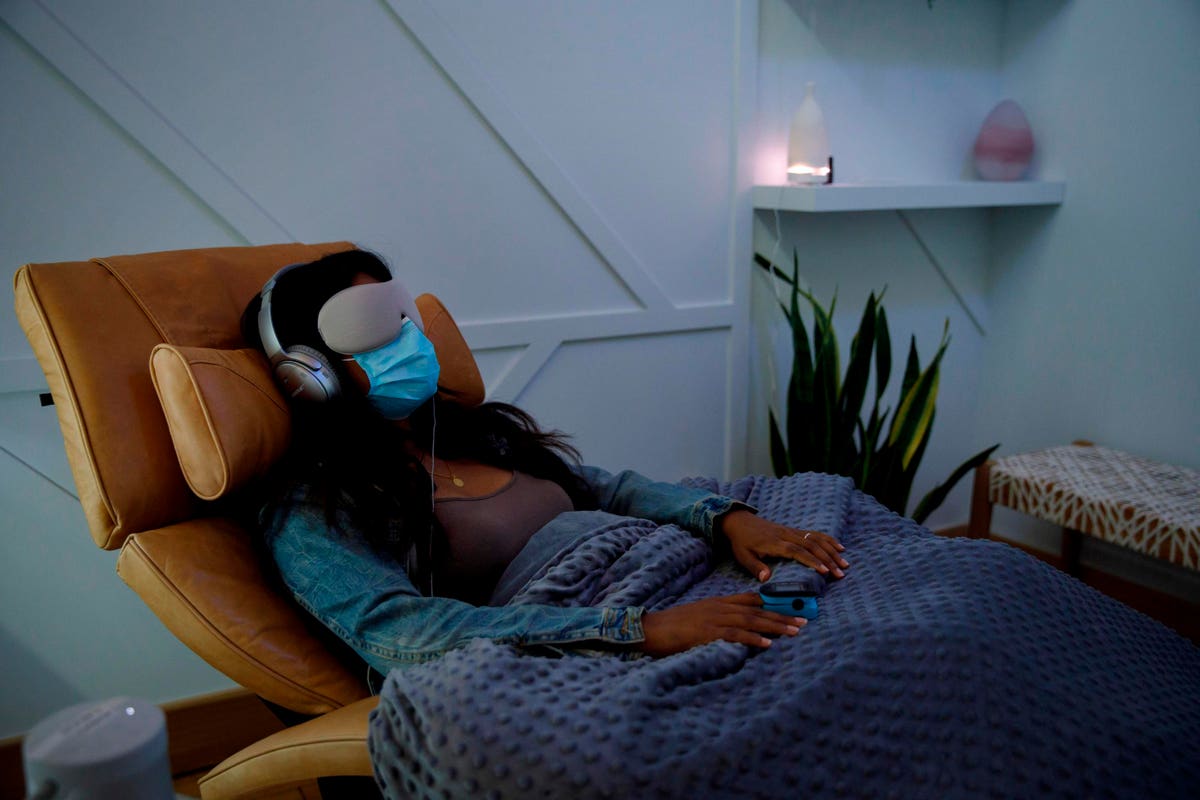 Getting well takes time, but the promise of drugs like psilocybin, the main ingredient of “magic mushrooms,” and MDMA, also known as Molly, is that they might work faster and better than current treatments for patients with depression and post-traumatic stress disorder.

Anti-depressants like Prozac and Zoloft take weeks to take effect while psychedelic drugs seem to work within hours. However, biotech and drug development startups are trying to make the psychedelic experience, which could range from four to 12 hours depending on the drug, shorter.

Florian Brand, the CEO and cofounder of Atai Life Sciences, a publicly traded German biosciences company focused on psychedelics and mental health, says that when it comes to scaling treatments that involve a psychedelic experience, the length of the psychedelic experience itself is an obstacle to mainstream adoption.

“We believe that you don’t need a 12-hour psychedelic experience, like with LSD, and the 15-minute experience of 5-MeO-DMT, is potentially too short,” says Brand. “We believe the sweet spot of the treatment window is somewhere in between.”

By modifying psychedelic molecules to shorten the trip more patients might try it and insurance companies could be more willing to cover the treatments.

“The goal is to optimize the treatment duration, shorten the effect, while maintaining efficacy,” says Brand, “which is why we’re optimizing for a two-hour treatment window.”

Two hours is not an arbitrary number. Treatments with ketamine, the dissociative anesthetic that’s being used off-label to treat patients with depression, and Spravato, an FDA-approved ketamine derivative, only requires two hours. The short treatment time, coupled with the fact that these drugs are currently the only legal psychedelics, have helped ketamine-assisted therapy go mainstream. Atai, through its various subsidiaries focused on different psychedelic molecules, is trying to develop a suite of second-generation psychedelics that feature a two-hour trip.

“Our ultimate goal is to make those therapies reimbursable,” says Brand. “Two hours is easier to deploy. A two-hour window is helpful to scale these treatments and requires less commitment from a patient, which is better for them to more easily integrate sessions into their lives.”

Atai, which is also the largest investor in Compass Pathways, a U.K.-based clinical stage company that is developing a patented form of psilocybin to be used in conjunction with therapy, is not the only company racing to develop a new short-acting psychedelic.

Field Trip Health, a Toronto-based mental health clinic company that has eight ketamine-assisted therapy treatment centers across the U.S. and Canada, also has big plans to bring modified psychedelic molecules to market. Field Trip is developing a psychedelic molecule that targets the 5HT-2A receptor in the brain, the same one psilocybin targets, and plans to pursue FDA approval. The compound, which the company has named FT-104 for the time being, packs a trip that’s only two hours long, or half the time an experience with magic mushrooms lasts. The company plans to launch phase 1 clinical trials early next year.

Nathan Bryson, the chief scientific officer at Field Trip who runs the company’s drug discovery program, says the hypothesis behind shortening the treatment timeframe is to make psychedelic-assisted therapy more convenient for patients and doctors.

“There’s always a better, more effective medicine that can be made,” says Bryson.

The reason psychedelic drugs have been found to alleviate symptoms of depression and PTSD in clinical trials, it is thought, is due the signaling of the 5-HT-2A receptor, which sparks what’s called neuroplasticity. Neuroplasticity helps the brain form new neural connections, which is believed to generate rapid and sustained positive mood effects. In a slate of studies, psilocybin-assisted psychotherapy and MDMA-assisted therapy have provided almost immediate reductions in symptoms of depression and PTSD after a single high dose. The effects last months in some patients.

“A long trip may not be for everybody,” says Bryson. “There’s been enough evidence out there to show that a short trip can work just as good as a long trip.”

Bryson believes that the signaling of specific receptors in the brain is more important than the duration of a psychedelic experience.

“It’s the intensity of the hallucinogenic response, or the trip, not the time,” says Bryson. “Once all those receptors are occupied, then you’re done. There’s no need for just to be lingering around anymore.”

What should take time is the psychotherapy that the patient receives before, during and after a psychedelic session, he says.

Delix Therapeutics, a Boston-based biotech startup co-founded by David Olson, a professor who runs his own lab at University of California, Davis, is aiming to develop neuropsychiatric drugs inspired by psychedelic compounds but do not make a patient trip in hopes to bring to market a medicine to treat conditions like depression, substance abuse and dementia.

Bryan Roth, a pharmacologist at the University of North Carolina at Chapel Hill, and his 30-person lab received a $27 million grant from the federal government’s Defense Advanced Research Projects Agency (DARPA), to fund his moonshot mission to find the next perfect drug, a molecule with the efficacy of psychedelics but without the hallucinogenic ride.

The opportunity for a new blockbuster medication to treat conditions like depression, anxiety and post-traumatic stress disorder is huge. Prescription sales for depression is estimated to be $50 billion a year globally, while the mental health market is worth about $100 billion in annual sales. While biotech analysts say that FDA-approved psychedelic-assisted therapy could seize $10 billion in annual sales by targeting the treatment-resistant depression subcategory, the real opportunity lies in replacing drugs like Prozac, Zoloft and other selective serotonin reuptake inhibitors.

Cybin, a Toronto-based biotech startup that’s listed on the New York Stock Exchange’s small cap equity market, is developing a dissolvable oral strip dosed with psilocybin to be used with therapy. But Doug Drysdale, the company’s CEO, says that while psilocybin has enormous promise, there’s a lot of room for improvement. His goal to bring to market a second-generation psychedelic drug that could be used during the typical 60-minute talk therapy session.

“We’re looking at ways to potentially have a faster onset of action and a shorter duration, something more manageable, maybe an hour,” Drysdale told Forbes.

But the pursuit of a modified version of psychedelic drugs does have its critics. Psychedelic research pioneer Rick Doblin, who founded the Multidisciplinary Association for Psychedelic Studies in 1986, says classic psychedelics work just fine and people in need cannot wait for companies to develop the holy grail of mental illness medications.

His organization recently released data from its phase three trial on MDMA-assisted therapy with shockingly positive results. The double-blind, placebo-controlled study found that 67% of participants who received MDMA-assisted psychotherapy no longer qualified for a PTSD diagnosis, compared with 32% in the placebo group. Doblin says FDA approval is within the next couple of years. In June, he told Forbes that he thinks the idea of a non-psychedelic psychedelic compound is a “bogus” pipedream.

Robin Carhart-Harris, a respected and influential researcher in the space who is currently the director of the psychedelics program at the University of California, San Francisco, sees the modification of psychedelic compounds to shorten the trip or remove it altogether as an attempt to bypass the work it requires to get well. Carhart-Harris says it requires time and effort to get down to the root cause of a person’s depression or mental illness. “A lot of the healing effect in psychedelic therapy is done through the talking that happens afterwards, the talking, the sharing, the learning, the ability to be self-aware and make conscious decisions about changing our life,” Carhart-Harris told Forbes in June.

The fact of the matter is that psychedelic-assisted therapy has tremendous promise, but no one has yet crossed the finish line. The question of whether the psychedelic experience, the triggering of neuroplasticity, or both are responsible for the potential therapeutic promise of these drugs still needs to be answered. And then the question of how long a psychedelic trip needs to last, balanced with how much will insurance companies be willing to cover, is another that needs an answer.

“I don’t have an answer right now,” says Brand of Atai. “I think it’s very reasonable to test all hypotheses. In this field, currently, there are a lot of opinions. And we still need to see what the research will reveal. I’m humbled to say, ‘I don’t know.’”